I include my name in the file name of all electronic documents I send to a client or potential client, including invoices and articles. I use this naming convention for my auditions:

I like having my name first so it shows up even in smaller windows.

Once you’ve been hired and have recorded the audiobook, use the naming convention for the book provided by the publisher.

If you aren’t given a format — such as with books produced on ACX — name the book files consistently so that they indicate both the book and the file’s location in the book.

The following naming convention accommodates multiple front-matter files, causes chapter 1 to start with the number 001, and will work for titles having over 100 chapters.

XXXX-BookName.mp3 or .wav, replacing XXXX sequentially with the numbering convention below.

If the book has fewer than 100 chapters, you can eliminate the leading 0, such as XXX-BookName.mp3

Here’s an example of the file labeling I used for one of my audiobooks. The use of dashes, underlines, or spaces between the words has not been standardized in the industy. Old systems couldn’t read spaces between words, so many people still include a dash or underline. If you want a character as a spacer, I would vote for the dash since it’s easier to see than an underline. 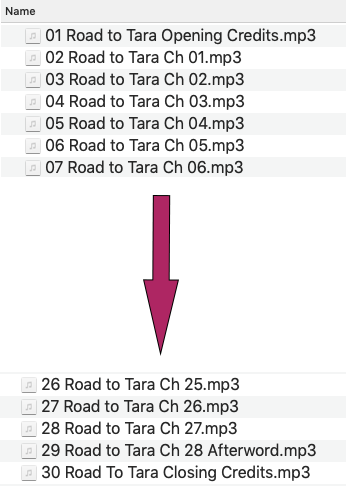