The short answer is “no”.

Copyright protection covers both the musical composition — the melody and lyrics that make the song — and the sound recording. Different people probably hold each of those copyrights. The songwriter or her music publishing company generally own the song copyright, and the performer’s record label usually owns the sound recording copyright.

Performing and distributing a copyrighted song without first obtaining the proper licenses for these activities is copyright infringement.

You should not sing song lyrics printed in your book unless the song is clearly in the Public Domain or the rights holder has paid for reprint rights and a mechanical license.

The “Happy Birthday” song was considered copyrighted until 2016, when a judge ruled it is in the Public Domain. Therefore, you could sing this song in your audiobook.

You cannot sing copyrighted lyrics with a made-up tune. The words still have the same meaning and sequence protected in the song copyright.

You should not even say the song lyrics unless the rights holder presents evidence of the necessary copyright clearances. The RH could have requested and been given permission to reprint the song lyrics in the book.

Since the melody is copyrighted as part of the song, you shouldn’t hum it in the audiobook.

You can legally say the song title since titles cannot be copyrighted.

“What about the Fair Use Standard?” I can hear you thinking. Fair Use allows a person to use a small amount of copyrighted material without permission in a limited way, such as in artistic criticisms and reviews, as well as in educational articles like my Case Study below. A piece must pass several subjective tests to be deemed Fair Use. No magic number exists for the amount of the song that could be freely used, and you don’t know whether a judge would agree with your position if you had to go to court.

Just remember: The music industry zealously protects its copyrights, and the publishing industry is extremely risk-averse.

While this real-world example deals with the song melody instead of the lyrics, the principle is the same.

As you can see in the below screen shot from Amazon, Stephen King’s book 11/22/63 includes a number of references to the famous Glenn Miller song “In The Mood”. The italicized portions of the circled text represent part of the melody of that song. You’ll notice that the same sequence shows up 5 times in the search results on the left. 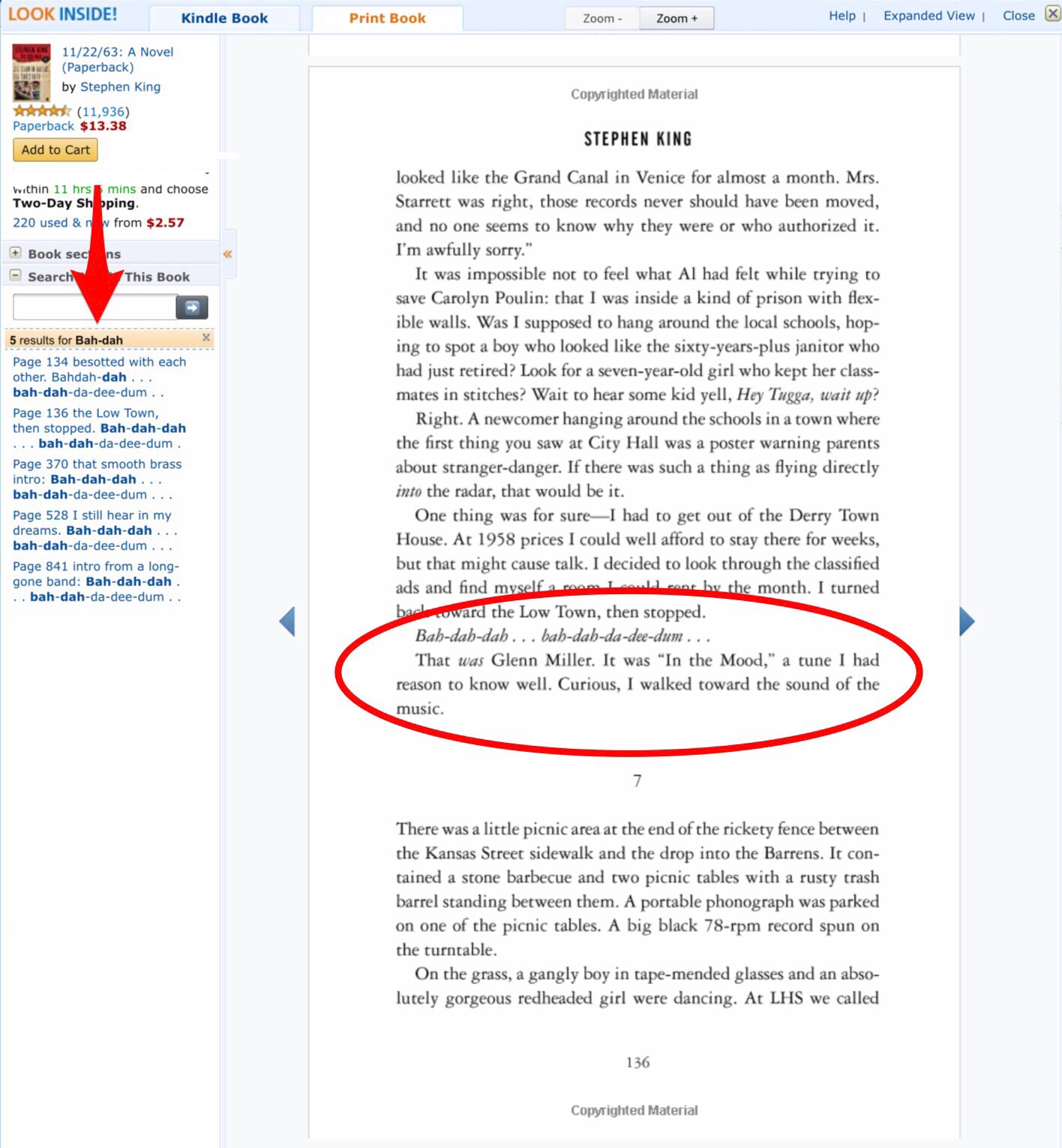 Glenn Miller plays the italicized part of the song in the :3 sample below.

This :13 excerpt from the audiobook demonstrates that narrator Craig Wasson did not hum a recognizable tune.

The listener knows the gender of the narrator and is not expecting him/her to sound like the other gender. Female narrators shouldn’t necessarily use lower pitch for male characters, nor should male narrators instinctively use a higher pitch to voice female characters.

Each character’s voice will be derived from their personality, which you discover through reading the book and taking notes. You want to be able to visualize a 3-dimensional person and ACT their part according to their scene intentions in the subtext.

Simply distinguishing characters on the basis of generic vocal tricks (changing pitch, gruffness, etc.) does not make the characters sound like real people and isn’t a sustainable approach over the course of a book. Remember, real people have differences in cadence, breathiness, musicality, and articulation. You may find that changing your posture even slightly is a helpful technique for physically embodying a different character.

Regardless of a character’s gender, I think of who I would cast in the role and then channel that person in my performance. The person could be an actor or someone famous, or it could be a family member or friend. This technique enabled me to think of 5 men I could picture as the drag queens who were in several prolonged scenes together in 2 books! If no one comes to mind, I start giving the character a back story that would shape how they would sound.

In books with dozens of characters, you may find that some of your minor characters tend to sound similar. That’s okay. Your main goal is to make sure that the major character voices are distinctive.

When you start out, you may be tempted to record each character separately and edit them together.

Avoid this temptation. You should read the book straight through and switch your voice as needed for each character as s/he appears. However, when doing dialogue between characters with a wide variety in accents, you may find that you need to stop and punch in more frequently.

Each moment in the book builds on the one before it. Recording the voices independent of each other would cause 2 negative effects:

To be honest, if you’re not comfortable with the practice of easily and quickly switching voices as you progress through the book, you need to spend more time in practicing performance skills and perhaps doing more prep before undertaking a project to be sold commercially.

Fiction books often feature characters with a wide variety of accents. It’s important to do your due diligence to determine if your capabilities are in best service of the text.

The book’s location(s) will dictate the type of accents needed, if any. The characters who live in the same place wouldn’t hear their accent differently, As narrator and dialect coach Joel Froomkin explains:

In general if the book takes place primarily where the language is native, you do not do a foreign accent because the characters are not speaking a foreign language to THEM. Hence, A Tale Of Two Cities isn’t narrated with a bunch of French accents. The foreign language itself is considered the non-accented neutral.

If the author states a character is from a certain place with a distinctive accent like London and doesn’t indicate the character has no accent, you should give that character an appropriate accent based on the location and the character’s socio-economic background and status.

However, if you can’t convincingly speak in the accent of the main character(s), you shouldn’t do the accent. The goal is to sound like a real person, not a caricature. Sustaining an accent throughout the book grows even more difficult if you have not lived there or at least had significant experience in speaking with the accent.

On the other hand, if you say you can do an accent, you need to do it WELL. You don’t need to be at the level of fooling a native speaker, but you do need to be respectful, convincing, and consistent.

Usually, hinting at the accent is enough to satisfy the listener. Barbara Rosenblat, who is known as the Meryl Streep of the audiobook world, wrote in her book Audiobook Narrator: The Art of Recording Audio Books:

Clarity is key…Your first responsibility is to be understood….

When I refer to “nuance”, I mean giving a good dollop of the flavor of the character so that you place your listeners firmly in the world you want to share with them without blowing them out of the room.

The resources on this page can help you hear accent traits and the musicality of the language, which is essential for a more authentic performance. Of course, listening to an audiobook from a native speaker certainly gets the musicality of the language into your mind! For instance, listening to David Tennant perform How to Train Your Dragon helped me perform a few lines of Scottish in one book.

Your library also may have courses in popular languages produced by Berlitz, Living Language, and Pimsleur.

You can also listen to radio stations in the country to aid your musicality. I’ve found that WordRadioMap.com is a good choice because you can quickly pick a country and city from drop-down menus and then click on a station to start listening.

The Radio.Garden site lets you search for a station with text or by “spinning” the earth and clicking on a dot representing a station. Narrator Madeline Mrozek alerted me to this site, which also has an iPhone/Android app.

With some Google searches, you might find radio stations in other countries with programming in English. You can also search the Apple and Google app stores for other radio apps.

Some narrators like to watch dubbed movies with sub-titles. Narrator Jennifer Blom offered this handy tip for Netflix users: Login to Netflix and go to this page. Select the language you want to see programs available in that language.

Other narrators have recommended the specific resources below for the accents listed.